What is a Cross Functional Team?

A Cross Functional team (or Cross-functional team) is a group of people from different disciplines, performing specialized tasks, coordinated to deliver value. A Cross Functional team has a common vision and a clear goal. It has a definition of “done” or “what success looks like” with buy-in from everyone on the team. Team members make the success of the project a priority, and they allocate enough time to make it happen.

Accountability is a major benefit of Cross Functional project teams. Consistent use of teams is a proven way to accomplish any corporate objective that requires multiple disciplines to produce a result that is accountable.

In product development projects, cross functional teams reduce time to market and increase product throughput and efficiency because they have a more effective decision-making process. While product development is one example, cross functional teams have many applications:  in marketing teams, IT, construction, finance, HR, and process improvement activities.

A Cross Functional team also concentrates resources and improves efficiency. Team leaders check to see that there are no gaps in skills or required resources. They use resources in a targeted way that employs them and then releases them when the project has no further need for them.

Most companies underestimate or overlook the benefit and opportunity that come from high performance Cross Functional teams. They also fail to account for the opportunity cost of sub-optimal team performance: both in hard costs:

How Do You Develop Cross Functional Collaboration?

Begins With the Team Leader

The process of developing a cross functional team begins with the leader. In most organizations a team leader is appointed (self-managed teams, where the leader emerges from the group, are an exception). The leader must have the skills and experience to coordinate teams, and deliver successful results, on time and on budget.

Often this leader is from product development, program management, or the product management functional organizations. A development team may often draw upon technical project managers, as well.

When a project starts, leaders need to understand the organizational goal of the project and what skills are necessary to achieve it. Leaders need to analyze the skill sets required for success, populating the team with the right individuals, from different areas within the company. The leader works with senior managers to populate the product team with the key skills, calling out where there are gaps, and where the organization might need to acquire resources.

The leader’s responsibility to the cross functional team is:
1) to communicate to the team the vision of the project and its specific goals and,
2) to develop a path to get there.

The leader is also responsible for acquiring the right resources for the team, and for ongoing project management, such as tracking deliverables and milestones. In the case of product development, additional responsibilities are required such as the ability to work with the sales team and finance organizations to ensure that their requirements are satisfied and that communication is fluid.

Once formed, the team and team leader agree on their respective roles and responsibilities. Divide the project into tasks and map their external dependencies. They also determine and map the internal interdependencies between each task, and the related functions and individuals. Assign a Directly Responsible Individual to each task. Here’s a template for a modified RACI chart that can help.

Resource the Team with Subject Matter Experts, too

Rarely do project teams start with adequate resources to deliver on a predictable schedule. More likely, one of the key risk mitigation efforts is to manage the ebb and flow of resources as individuals work on different projects at different times – but when you need a subject matter expert, the team cannot wait until one is available. And then, invariably, something falls through the cracks, and throws the project off the rails because you didn’t have the right resources in place.

Unclear definitions of roles – like program manager, the core team, and adjacent teams  – lead to communications and decision-making issues that cause schedule slips, cost overruns, and organizational chaos. This is especially true for companies with organizational silos, but can even hamper small companies and startups.

Although Cross Functional teaming is a part of Agile, it is not dependent on any other aspect of it. Organizations performing project-based work of any type, be it a new product development project or an infrastructure improvement effort, can use Cross Functional Teams to great advantage.

This Cross Functional Team Model is from a new product development project, showing the typical functions for a system level product containing hardware and software (apps). Also known as the Project Team Wheel, this organizational diagram is based on a core team concept.

Put the team leader in the center of the team wheel. Then sketch out the core team around the leader, including the key functions and individuals within them. Outside of the core Cross Functional team, place the extended team members. The extended team includes the functions that will support or augment your team intermittently throughout the project. 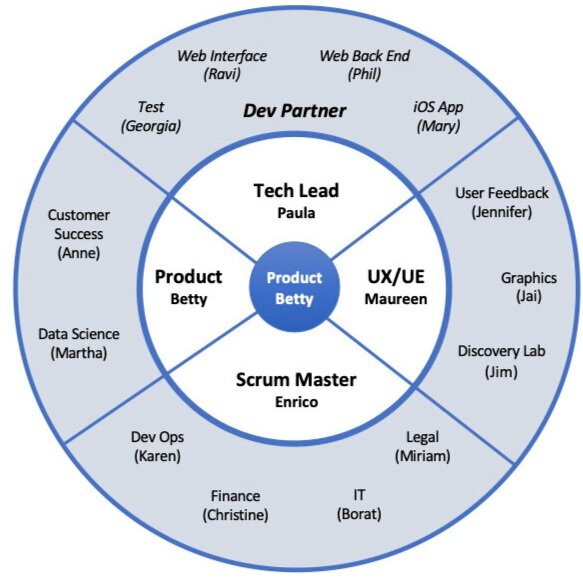 Most projects are interdependent and complex. They require technical skills but not on a full time basis. The Project Team Wheel identifies which Cross Functional team members cover which functions.

Using the Project Team Wheel at the beginning of a project ensures that you have a clear team structure with established leadership, and with all necessary functions on board. The tool also helps you to establish who has responsibility for top-level deliverables. It also:

How to Build Cross Functional Teams

Define roles and responsibilities as clearly as possible

Defining team roles and responsibilities seems like a trivial task that is more bureaucratic than useful. But the lack of clarity around cross functional deliverables and dependencies causes missed opportunities to reduce cycle time, manage resource gaps, and stem team chaos.

Having clarity around who is doing what and when will free up teams to focus on the work required to innovate and deliver products to market. You might want to tackle this as part of a team building activity.

Implement a core-team model for the Cross Functional team

Implementing a core team model is the most effective way to optimize a specific project team’s performance, reduce cycle time, and ensure that the extended team is functioning efficiently.

Cross functional teams typically consist of four to six team members, under a team leader (or Product Owner), drawn from different functional areas or various departments. For example, in a product development project these leads might include representatives from program management, product management, engineering, design, manufacturing, and quality assurance. The team shares the responsibility of delivering the project within the defined objectives.

The core team meets frequently, typically once per week. It is responsible for communicating with the extended team. With an emphasis on strong leadership skills, the team can serve as an effective nucleus for driving execution, escalating project issues, and managing cross functional dependencies.

Empower the Cross Functional Team with a high level of authority

If you establish a culture of team accountability across your organization, and empower your team to drive daily decision-making, you will see measurable gains in the team’s ability to creatively innovate and shorten cycle time. While there are some circumstances where command-and-control leadership is appropriate, we’ve found that if you use it as the norm, it will result over time in lower accountability, demotivated teams, and delays.

Giving the team a maximum of responsibility is a strategic investment in attracting the best talent. High-performance teams consist of high performers — both individually and as a team. High performers on cross functional teams thrive on accountability. If you make the team accountable, you will tend to attract the best people.

Foster a culture of trust and team collaboration

Teams can only achieve high performance if they work in an environment of trust and collaboration. Anything less means that individuals will shift their focus from the common good to their own survival.

Notice what happens in your organization when bad things happen: when the schedule slips, a quality issue has stopped the manufacturing line, or the product cost is exceeding the margin target. How does your organization respond? Teams achieve high performance when they know they can deliver bad news — with their recommendations for mitigation and resolution.

A Cross Functional team is more likely to achieve high performance when they work in an environment that emphasizes problem solving rather than a culture that is about finding the guilty and blaming them. And because senior managers have created an environment of empowerment and trust, they get projects back on track faster than those teams that work in a less trusting environment.

Have clear lines of communication and clear metrics to track progress (no traffic lights!)

Having ways to communicate efficiently and effectively with project sponsors and executives is the best way to build trust between managers and the cross functional team.

This includes relatively “frictionless” ways to provide frequent written updates (weekly or biweekly). It can be as simple as a planning/doing/done list for Agile methods; or a project dashboard. Slack and other chat methods are effective ways to increase velocity too. 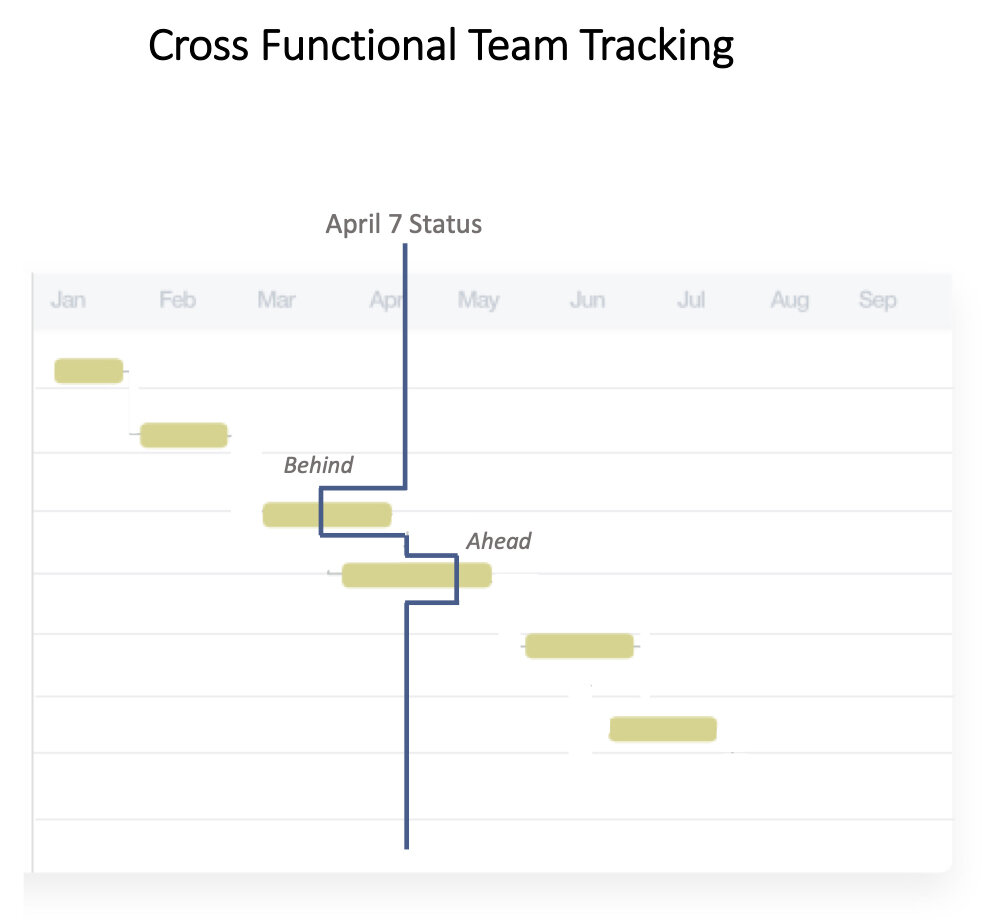 Reporting progress is also important. For example, with a traditional development process, drawing a vertical line drawn on a Gantt chart is one of the fastest ways to show progress. If all milestones are on track, this line is straight. If a task is behind schedule, the progress line will deviate to the left indicating the true progress of a team on that task. Traffic lights (Red-Yellow-Green) are ineffective at demonstrating progress because they are too subjective.

With Agile programs, a story burndown chart is the best way to show a team’s progress. In Agile environments, the team estimates all tasks, and only when the task (story or feature) is completed are the points subtracted from the starting backlog.

The right leader is someone who is trustworthy, competent, capable and of the right stature for the challenge. The team leader ideally is someone experienced in being both a member and a leader of Cross Functional teams.

2. Have qualified people in their roles

People and their relationships are incredibly important to innovation. How much more effective do you think your most productive contributor is in relation to your average contributor? Whether you think this ratio is high in your organization or not, no one can argue the fact that individuals make a huge difference. Teams consist of people and it’s imperative to get the chemistry right.

3. Ensure their roles are clear

On the best Cross Functional teams, roles are clearly defined. Team members know what they are supposed to do and how they are expected to relate to each other and to the team lead. The Cross Functional team also has a clear decision-making model. The escalation path, and conflict resolution, if required, is clear.

Even the best cross functional teams, with the very best members, get hamstrung without the right funding or adequate facilities for prototyping or testing. Management’s job is to make sure that the team has everything they need to be successful. Make sure your people are not spread too thin. Between one and two projects is the optimum load, though a dedicated team is best if you want the team to succeed.

Cross Functional teaming is more effective when senior leaders, the team leader, and team members have clear rules of engagement. They know their roles and responsibilities and how they relate to what everyone else is doing. Teams also have a clear and explicit escalation path to correct the team’s direction if it starts to go off track.

6. Have clear goals and clear communication

Effective Cross Functional teams have a clearly agreed-upon goal that is measurable and they also continue to communicate throughout the project. Many Agile teams have short daily meetings, which is a best practice for high performance teamwork. Clear objectives and good communication skills help propel teams to create spectacular results.